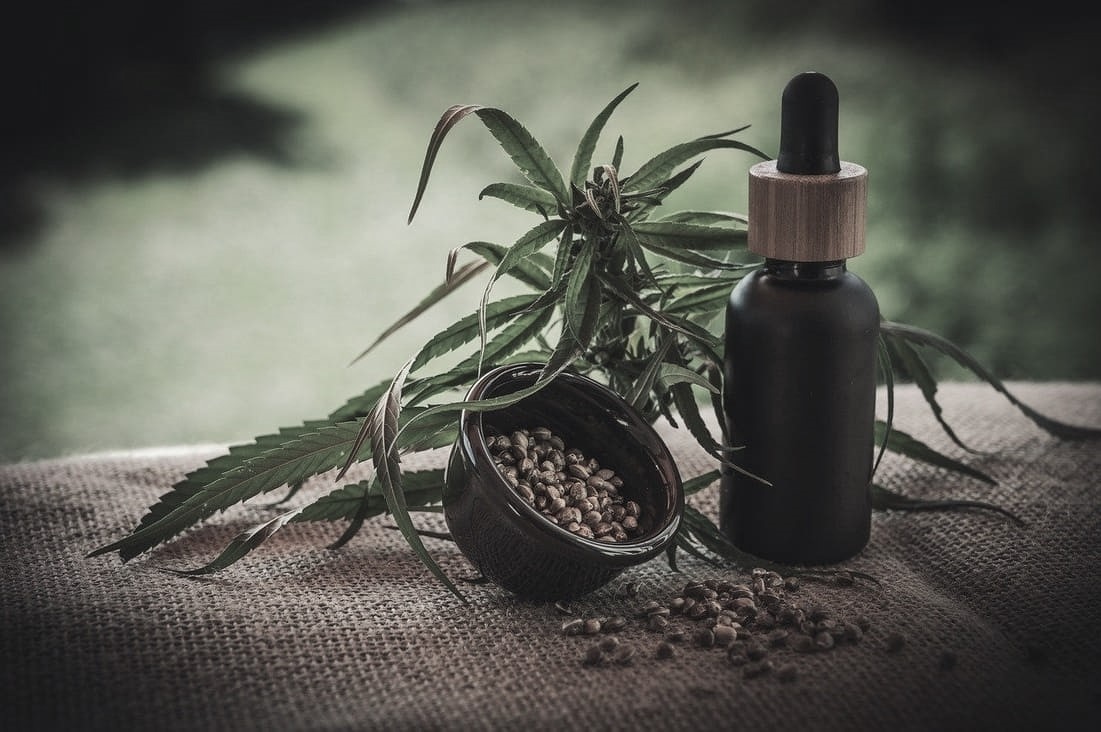 You’ve probably already heard of CBD. It’s been a bit of a buzzword in the wellness industry over the last few years. Claiming to help with all sorts of ailments, from insomnia to diabetes, CBD has been marketed as a miracle elixir. Unfortunately, it has been under-represented in studies, so as yet there is no medical scientific evidence to back up these claims. However, people that use it have been raving about its abilities to relieve pain and anxiety. But what is CBD about, and does CBD oil help with sleep?

What Is CBD About?

The two main active compounds are CBD (cannabidiol) and THC (delta-9-tetrahydrocannabinol). THC is the stuff that gets you all floaty and high, affecting your mood and emotions as well as your motor functions and cognition. The marijuana plant has a higher concentrate of THC. The hemp plant contains much more CBD, which is non-psychoactive and has only traces of THC.

How Is CBD Oil Extracted?

1.CO2 – One of the most popular extraction methods is using Carbon Dioxide and closed-loop extractors. CO2 is pumped into a chamber full of cannabis plants. The chamber is pressurized to keep the CO2 in liquid form so it absorbs all the oils and flavors. It’s then moved to another chamber where it is turned back into a gas, leaving behind the CBD oil.

2. Oil Infusion – This is an ancient technique that is used for extracting the essence of many flowers and plants. The plant material needs to be decarboxylated (heated) to activate its compounds. Then it’s immersed in the carrier oil and heated again to 100°C for a couple of hours. One problem with this method is that the carrier oil doesn’t evaporate so the end product will be CBD oil mixed with a carrier oil, rather than pure.

3. Liquid Solvents – Ethanol, butane, hexane, and isopropyl alcohol can all be used to extract CBD, in much the same way as the CO2 process. This way is cheaper and easier, but the finished product may not be of such high quality. The solvents can carry impurities and chlorophyll from the plant, leaving the oil with a bitter taste and a slightly greenish hue.

Full Spectrum CBD is made by processing the whole plant, the leaves, the flowers, the lot. The final extracted product has CBD plus all the other plant compounds found in cannabis like flavonoids, terpenoids, and other cannabinoids. It will also contain a tiny amount of THC, less than 0.03%, not nearly enough to get you high.

Full Spectrum CBD is sometimes put through another refining process to remove these trace amounts of THC. It then becomes Broad Spectrum CBD.

CBD Isolate is further refined to remove all the other plant compounds, leaving nothing but pure CBD oil. Many of us are fooled into thinking that as it’s pure it must be the better choice. It’s also more expensive to buy, even though it’s cheaper to produce and it’s considered by many to be less effective.

Hemp Oil is another product of the cannabis plant, but instead of being made from flowers and leaves, it is made from seeds. It doesn’t contain any cannabinoids but it does contain many other beneficial elements such as essential fatty and amino acids, Vitamins A, C, and E, protein, minerals, and fiber.

Full and Broad Spectrum CBD oil is generally considered the better choice of remedy for most ailments as the wide range of compounds act in harmony together creating what is known as the Entourage Effect.

What Is The Entourage Effect?

The Entourage Effect refers to the wonderful synergy that happens when certain chemicals work together. It’s a reaction in our bodies that happens when a combination of cannabinoids and other elements from the cannabis plant are introduced at the same time, and how they work with our endocannabinoid system.

As an example, Terpenes, the compound that gives the cannabis plant its aroma, are quite healthy in themselves. The delicate interaction between these and the cannabinoids actually increases the beneficial elements of CBD whilst lessening the anxiety that is sometimes induced by THC.

When individual cannabinoids enter the body, they don’t perform quite as well as they do when there are other compounds present. If you’d like to learn more about this effect you can check out Dr. John McPartland’s study “Greater Than The Sum Of Its Parts”, here.

What Is The Endocannabinoid System?

The Endocannabinoid System is one of the systems in the human body that works hard to keep us in a state of homeostasis. This basically means that it regulates certain things to make sure our internal environment stays in balance. This stable environment is extremely important for our organisms to grow and function properly.

Many common diseases are a direct result of internal imbalances. Diseases like epilepsy, obesity, arthritis, cancer, and Alzheimer’s are all thought to develop when the body is out of homeostasis. There’s also a link between the development of Alzheimer’s Disease and a severe lack of quality sleep, due to a build-up of waste in the brain that is usually cleared away while we sleep.

The Endocannabinoid System plays a huge part in regulating our biochemistry to manage processes such as:

How Does The Endocannabinoid System Work?

The Endocannabinoid System has two types of cannabinoid receptors, CB1 and CB2, located on cells throughout the immune system and the central and peripheral nervous systems. These receptors react differently to the cannabinoids.

CB1 is linked to immunity, appetite, and the moderation of stress and anxiety, among other things. CB2 mostly takes care of tissue damage and inflammation.

When an imbalance is detected our bodies actually produce their own cannabinoids. Amazing, isn’t it? These cannabinoids then travel to the receptors and produce a chemical reaction that gets on with the job of fixing the imbalance and returning the body to a state of homeostasis.

Cannabinoids are what enable the other cells in the body to communicate and work together. Some of us can be deficient in cannabinoids, our bodies simply don’t make enough to keep us in a state of homeostasis, and that’s where taking cannabinoids from plant sources comes in.

Interestingly, from what we know so far, you can’t actually overdose on cannabinoids. Never in history has there been a recorded case of someone dying from cannabis use. Obviously, if you are smoking it with tobacco there are risks of diseases related to tobacco use, but the actual ingestion of cannabinoids has never killed anyone.

This is thought to be because the Endocannabinoid System doesn’t affect the area of the brain that controls our heart and lungs. There can be negative side-effects of overindulging in the THC cannabinoid, such as anxiety and paranoia, but it’s not lethal.

Yes, according to one of the biggest surveys ever conducted by Project CBD on the use of CBD. During a period of 8 months, 3,500 people used CBD oil for pain, mood, sleep, physical function, energy or motivation, and the ability to socialize. When they reported their findings the majority of participants said they definitely felt some improvement across all measures.

It seems that people found CBD oil most effective in helping them deal with pain, helping them sleep, and also for regulating their moods. It just generally made them feel better.

Of this survey, 1,521 people took CBD specifically to help them sleep. Many of them had underlying health issues such as pain or hormonal conditions that interfered with their sleep. Some had trouble falling asleep, others had trouble staying asleep and woke several times a night.

Participants were asked to keep an estimate of how long it took them to get to sleep and how many times they woke during the night, with and without CBD. The results were quite compelling. 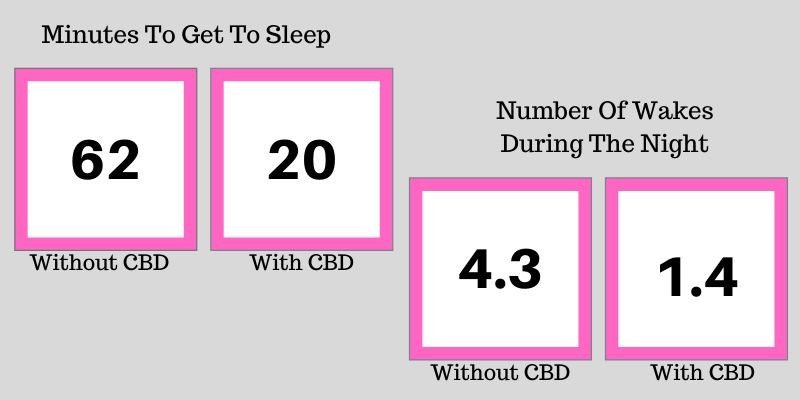 Not only were people falling asleep faster and staying asleep longer when they used CBD, three-quarters of the participants in this study also reported feeling less tired and more refreshed upon waking. I think it’s safe to say that for the majority, CBD improves sleep quality.

Whether CBD actually incites feelings of drowsiness or whether we just sleep better because it helps with the underlying issues that cause insomnia such as pain, anxiety, and depression, is still under debate. But what we do know is that 60% of users are using CBD as a sleep aid. It’s working for people, consumer reports have proven that.

What Dosage Of CBD Oil For Sleep?

Dosage can be a tricky subject as most doctors working today were given no training concerning CBD usage in medical school. The good thing is that there have been no reported adverse side effects or overdoses from the use of CBD oil so you can have peace of mind while you figure out what works for you.

As CBD oil contains little to no THC you aren’t going to get high from taking it. The psycho-activity associated with cannabis is all from the THC. Full Spectrum CBD oil contains less than 0.3% THC so you don’t need to feel nervous or worried that you are going to start feeling strange.

CBD oil is usually taken orally. A couple of drops under the tongue about 30 minutes to an hour before bed is a good place to start. When taken orally CBD takes around 30 to 90 minutes to take effect. You can gradually increase your dose if you feel it is necessary.

The main thing to remember when trying to figure out the right dosage for you is:

And don’t be afraid to experiment. CBD offers so many potential benefits it’s definitely worth exploring. Especially when you consider the other option for treating insomnia and other health issues – pharmaceuticals.

We know of the many adverse effects pharmaceuticals can have on our bodies. Go the natural route first and see what wonders CBD oil can do for you.

If there’s anything you’d like to add, or if you have any questions, please feel free to get in touch in the comments below.

An Overview of the Endocannabinoid System